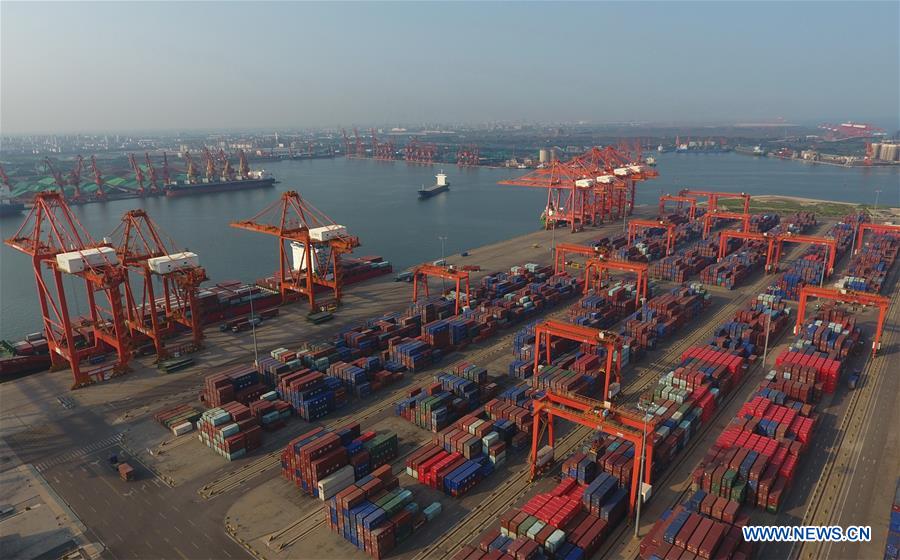 BEIJING, July 14 (Xinhua) -- China registered better-than-expected foreign trade performance in the first half of the year, with exports and imports both rising in June, as the country's economic recovery gathers momentum amid further containment of COVID-19.

The country saw its foreign trade rise 5.1 percent year on year in June, with exports and imports up 4.3 percent and 6.2 percent respectively, the General Administration of Customs (GAC) said Tuesday.

Following the turbulence in the first quarter, imports and exports of the second quarter showed signs of recovery and stability, and the exports have risen for three consecutive months, said GAC spokesman Li Kuiwen at a news conference.

Foreign trade of goods went down 3.2 percent year on year in the first half of this year to 14.24 trillion yuan (about 2 trillion U.S. dollars), narrowing by 1.7 percentage points compared with the decrease for the first five months.

BUCKING UP AGAINST THE EPIDEMIC

China's effective COVID-19 control and early business resumption have been solid support for the rebound in imports, according to Li.

In the first half, China's imports of mechanical and electrical goods increased by 1.2 percent year on year, among which the imports of electronic components, as well as automatic data processing equipment and components, jumped 14.1 percent and 7.2 percent, respectively.

China has also paid particular attention to helping foreign trade enterprises in times of difficulties, especially the smaller firms, by cutting or deferring fees and taxes and supporting them with sales in the domestic market, according to Li.

Driven by the stay-at-home economy springing up amid the COVID-19 outbreak, the exports of laptops and mobile phones went up by 9.1 percent and 0.2 percent, respectively.

Meanwhile, China has actively expanded imports by allowing the purchase of more commodities from more countries.

Noting that China's exports and imports continue to face a grim and complicated situation in the second half of this year, Li said the country's foreign trade is resilient and has more leeway. He assured that a raft of pro-trade policy measures will take effect to ensure stable and high-quality foreign trade.

The expansion was partly buoyed by growing interconnectivity in electronic manufacturing between China and countries like Vietnam, Malaysia and Singapore along the global supply chain, said Li. Integrated circuits, for instance, saw imports from and exports to ASEAN grow 23.8 percent and 29.1 percent, respectively, in the period.

China has also made substantial headway in sharing high-quality development with countries along the Belt and Road (B&R), said Li.

Trade with B&R countries accounted for 29.5 percent of the total trade in the first six months, up 0.7 percentage points year on year, driven by active cooperation in COVID-19 control, setting up smart customs, as well as the China-Europe freight trains, as anchors of stability for the global supply chain.

During the same period, trade with the European Union and the United States decreased 1.8 percent and 6.6 percent, respectively, GAC data showed.

Experts believed that it is only a matter of time before China's foreign trade recovers to the normal level of the past as some countries loosened trade restrictions and domestic demand increased quickly.

In the second half, China's foreign trade recovery will accelerate, with players boasting high efficiency in their industrial and supply chains likely to secure better performance, said Zhang Yansheng, chief researcher of the China Center for International Economic Exchanges.

Most Read The Latest
菲律宾太阳娱乐登入网址