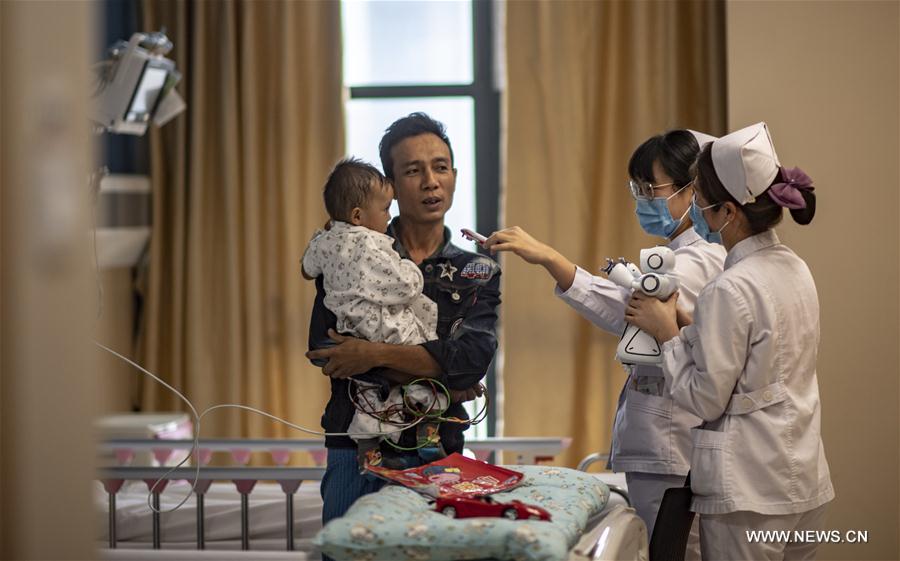 Nurses play with Wint Nadi Hlaing, who is recovering from the surgery, at Fuwai Yunnan Cardiovascular Hospital in Kunming, southwest China's Yunnan Province, Jan. 3, 2020. Khant Thurain Phyo, who had been diagnosed with serious CHD, arrived in Kunming, capital of southwest China's Yunnan Province, with his mother a month ago, for free treatment sponsored by a rescue action plan under the Belt and Road Initiative. The action plan was launched by the China Charity Federation, Yunnan Charity Federation and the FYCH in 2018 and has so far treated 15 Myanmar children with CHD. (Xinhua/Jiang Wenyao)

KUNMING, Jan. 17 (Xinhua) -- In a ward at Fuwai Yunnan Cardiovascular Hospital (FYCH), a nurse comforted 2-year-old Khant Thurain Phyo with a toy car. His mother Zar Yi Myint was jollily making a video call with her husband and daughter back in Myanmar.

Khant Thurain Phyo, who had been diagnosed with serious congenital heart disease (CHD), arrived in Kunming, capital of southwest China's Yunnan Province, with his mother a month ago, for free treatment sponsored by a rescue action plan under the Belt and Road Initiative.

Looking at her son who can now jump like a playful deer, the 28-year-old mother was grateful for the Chinese doctors. "They gave my child a second life."

"He was skinny at birth. He frequently suffered from difficulty breathing," the mother said.

When the diagnosis came out, the poor boy could only rely on medicine to stay alive due to inadequate medical conditions for surgery. But the high medical costs almost pushed the family to the brink of collapse.

Upon hearing the news that a hospital in neighboring Yunnan was willing to offer free treatment to children with severe CHD, the struggling family saw a glimmer of hope.

In 2018, a Chinese medical team arrived in Yonjin Children's Hospital in Myanmar's Rangoon. They checked 58 children diagnosed with CHD and took 15 seriously ill patients back to Kunming for treatment.

The team arrived in Myanmar again last year. After examining 25 children with CHD, they took eight back for treatment on Dec. 4. Khant Thurain Phyo was one of them.

His mother spent a sleepless night outside the operating room, staring at the electronic screen while praying. After five grueling hours of waiting, she was told that the operation was successful. She burst into tears of joy.

"We customized treatment and operation plans for each child based on their own conditions," said Ma Linkun, deputy director of the FYCH.

According to Ma, operations on the eight children have been successful. Four have been discharged and returned to Myanmar.

Myint Myint Khine is the director of Yonjin Children's Hospital. After visiting the FYCH, he said that the cooperation on treating children with CHD has deepened bilateral relations and mutual trust.

Hnin Le Phyu, a nurse sent by the Yonjin hospital, has just finished a one-month training at the ICU department of the FYCH.

Medical institutions from Laos, Cambodia, Bangladesh and other countries that visited the FYCH also recognized the successful practice of the action plan, and showed a willingness to cooperate as well.

"I believe that my son will have a bright life after this. And I want to refer more Myanmar children with the disease to the program," the mother said.

Most Read The Latest
菲律宾太阳娱乐登入网址